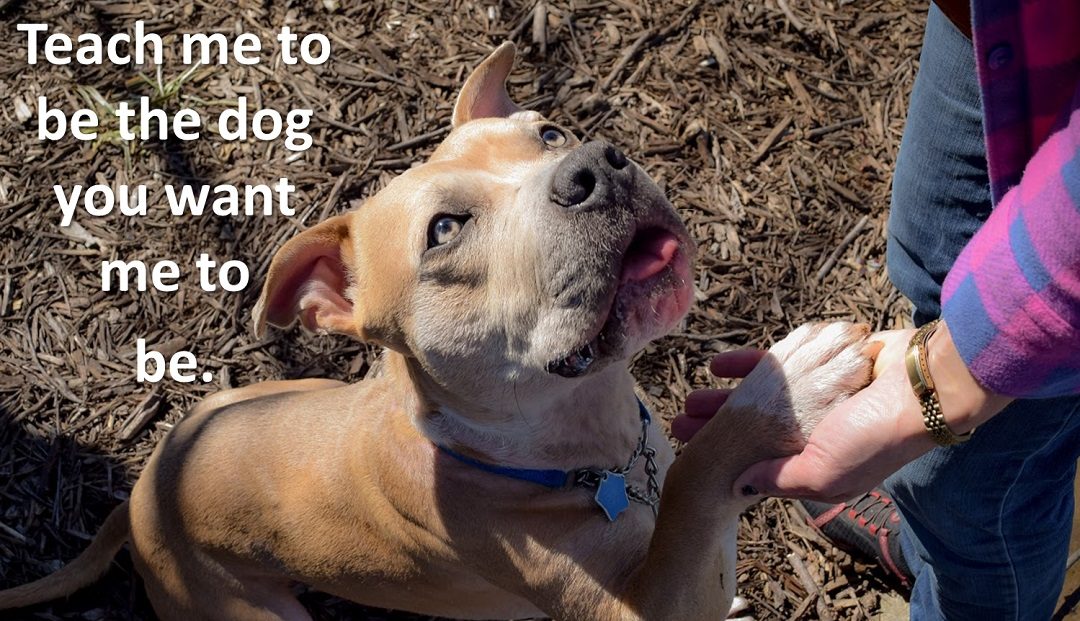 If you just delivered or adopted a baby girl, would you deny her the basic human education and socialization? Would you let her figure out by herself how to walk, ride a bike, or behave in public? Or would you spend the time to teach her, demonstrate it, and coach her? I know I ask weird questions and here is my point.

A lot of people look at their dogs like family members; they love their dogs just as much (and sometimes even more) than their human family members. They would do anything for their dogs, but many of them deny their dogs basic education and dog socialization.

Just within the last month I met with two families who love their dogs but failed to provide them the necessary education and socialization. They called me because they both consider giving away one of their dogs due to behavioral issues.

Meet Family #1: They have two pit bull females. They raised both females as puppies. The dogs got along fine until the youngest one turned seven months. A physical argument started between them, more followed over the next five months. They separated the dogs but as soon as they bring both dogs in one room, these two dogs want to attack each other. Both dogs are rather fearful in their own way. One doesn’t know how to behave outside of the four walls and the other acts fearfully when strangers enter the home; these were both behaviors that could have been easily resolved with proper socialization. The “problem dog” was sent to boarding and training but the trainer couldn’t do anything with the dog because the dog shut down and was too fearful to engage with anyone. Now the family wants to rehome the “problem dog” because they cannot live with two adversary dogs in one household anymore.

Is it the fault of the dog(s)? Did the dogs cause this outcome? My answer is “It started for whatever reason, the family didn’t know how to address it (even though they had dogs their entire lives) and since they weren’t proactive right away, the situation got out of hand.” They missed giving their dogs proper education, socialization, and boundaries so that both dogs could live together in harmony. Instead, they gave both dogs affection and love which didn’t solve the problem. Now one of the dogs is on Petfinder trying to find a new home.

Meet Family #2: They also have two pit bulls. (Sorry these examples have nothing to do with the breed; I just happen to volunteer with a pit bull rescue organization and the inquiries they get are about this breed.) They also have two young children. The male dog is three years old, and the family has been having the dog for the last two years. All this time he has been rather fearful. He nipped a couple of children and he is timid around adults. He nips at people if they stand too close to him, and he acts aggressively when people ring the doorbell. The straw that broke the camel’s back was when he nipped the son on the cheek when he startled the dog who slept on the couch.
I asked the family to bring their 9-year old son and the dog over to our home. When I met this dog, I saw a healthy dog who was uneducated. And when I watched the family interact with the dog, they acted rather timid too. Now the fear aggression of this dog has nothing to do with the breed or personality but with the lack of socialization. This dog didn’t have any education. This dog hasn’t been taught to be handled and touched by humans. Sure, he knows sit and come, but that is not enough for a dog to feel safe in a home.

Most people think that when they teach their dog “sit” and “come” that is enough. Everything else the dog will figure out over time. But a dog doesn’t think like a human, a dog doesn’t live by the same rules and the psychology as humans do, and if a dog hasn’t been taught, the dog will always do what a dog will do – act on its instinct and not on education.

Many dogs in this country (BUT NOT ALL) don’t have it easy even though the families love them (conditionally of course). They get a limited education and socialization. Many humans love their dogs, but they rarely spend an hour or two educating themselves on dog behavior and dog psychology; they just think that if they treat their dogs like a human baby, the dog will be alright. But if we treat the dog like a human baby, where we give the dog unconditional love, or comfort the dog when the dog is in a fearful state of mind, we will set her up for failure. And if we don’t treat the dog like a human baby, where we spend time with the dog and give her a proper education and socialization, we set the dog up for failure as well.

So what is a family ought to do?

1. When you adopt a dog or even if you have been having dogs for a long time but realize that your dog has some behavioral issues, go to a library or bookstore and educate yourself on dog behavior and psychology. There are also a lot of online courses that you can take from the comfort of your home. Just like you take baby classes during the pregnancy, just like you take driving classes before you buy a car, or read the instructions before you buy a new device, you want to educate yourself about dogs. Having had dogs when you were little and watching your parents handle dogs, doesn’t mean that they were doing it correctly.

2. Spend time with your dog and give your dog the proper education and socialization. Most people think that taking your dog to a group training class at PetSmart is all that they need to do to have a happy pooch. But a group training class is just a tiny spectrum of a dog’s education curriculum. Build a trusting relationship with your dog. Expose your dog to different situations to build his confidence. Touch your dog all over his body without him reacting to you. Make your dog lay on the floor, move him to his side, roll him around. Touch his paws, his ears, his gums where he just lays there and feels safe for you to touch him. Get him around people and other dogs. And when your dog is fearful of something specific, create exercises to help your dog overcome this rather than avoid the situation. When you do these types of exercises, you will also notice that the visit to the vet will be much calmer and smoother because your dog isn’t afraid to be handled. If you have young children in your household, desensitize your dog even more through touch, sound, or movements, so that your dog gets used to it. Now that doesn’t mean that you give your children free range and don’t educate them about proper behavior around dogs but in case your child forgets, you may not have to deal with an unfortunate experience.

3. Take your dog on daily walks and I cannot stress this enough. Dogs need daily exercise and romping around in the backyard is just not enough. Walking your dog is more than just letting him “do his business” – it’s also a great time for socializing, bonding, stimulation, and training. Additionally, it is a perfect stress reliever for you and will ensure that you will stay (or become) fit and trim. Too many dogs develop behavioral issues such as aggression, excessive chewing, anxiety, overexcitement, etc. because they don’t get enough physical and mental stimulation.

4. And if your dog develops an issue, don’t let it slide. Stay on it. Read about it, ask friends or consult with a professional. When you nip an issue in the butt as soon as it arises, you will have a good chance that it will be resolved quickly and permanently.

You didn’t come in this world fully educated; your human child didn’t come in this world fully educated, and neither did your dog. And just because you adopted an adult dog doesn’t mean that the dog doesn’t need any more training and socialization. Too often I hear people blame it on the “rescue” part of their dog “oh, he is a rescue; that’s why he does x.” They don’t realize that they keep the dog trapped in the sad rescue story the more they repeat it. Most of the time the humans failed the dog by not educating themselves and the dog and that’s why the dog ended up in the shelter. Most of the times it is not that the dog needs more training but the humans do.

If you want to take a shortcut and learn more about how to correct some behavioral issues in your dog or how to train your dog to become a good canine citizen, I invite you to join me for my upcoming seminar “Let’s talk dogs” on Saturday, July 9th at 10 am in Marietta, GA. Learn more and sign up here.

Want to attend an upcoming seminar in the Atlanta, GA area that benefits the rescue group of your choice?